Through a series of treetop installations a far-future vision for urban parks is explored that responds to current research and development in biological and renewable energy. Energy Futures uses story telling to address how we might live in an ever more energy scarce future and was inspired by current scientific research.

Science stories are the narratives that scientists create to support their own dreams and to communicate these dreams with others. Stories are tools that scientists use in the same way designers, engineers and artists share knowledge and seed future possibilities. Stories draw together what classification in the sciences splits apart. They are able to capture the complexity of new ideas and allow people to situate themselves inside these future scenarios.

For Energy Futures science stories are visualised in the park with four installations. These installations re-imagine the park as an Energy Orchard where biology and technology converge to generate new strategies in energy farming, distribution and use in the City of Lille.

At the heart of Energy Futures is the tree and the installations celebrate their exquisite ability to process energy and metabolise. The installations are comprised of TreeSkins and TreeLungs. 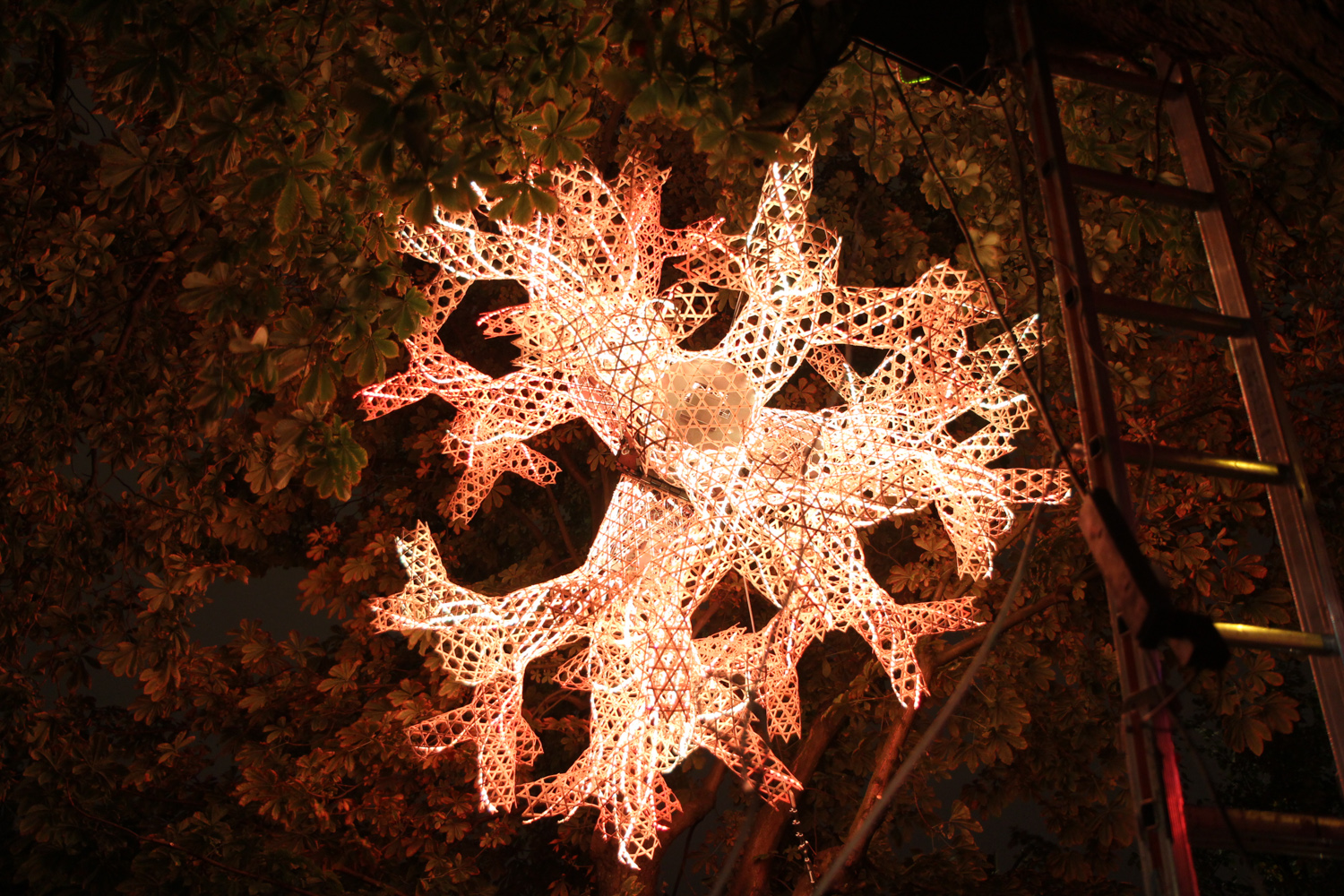 TreeSkins are future probes into new biomaterials and technologies. They are grafted and grown onto the branches of living trees. These biomimetic skins augment and ‘improve’ the function of trees through human, scientific intervention. Their appearance is somewhat reptilian with a scaled skin merging with the bark. They generate energy and sequester carbon and their functions range from bio-luminescing to artificial photosynthesis and carbon capture.

The trees of the Energy Orchard gently luminesce at night suggesting a bioengineered plant that has been genetically altered to glow similarly to many squids and fireflies. If trees could self illuminate and become ‘living lights’ then perhaps urban street lighting, as we know it would be redundant?  Students at the University of Cambridge have taken the first step by developing genetic tools that allow bioluminescence traits to be easily transferred into an organism. The team calculates that for a bioluminescent tree to compete with a streetlight, only 0.02 per cent of the energy absorbed for photosynthesis would need to be diverted into light production.

On one of the genetically modified trees tiny white follicles spring from its surface. The hairs increase the surface area allowing it to trap and store carbon atoms both day and night. The carbon capture ability of the tree is vastly improved, allowing 10 times more carbon to be sequestered through a genetic development of the bark. Scientists from Columbia University’s Lenfest Center for Sustainable Energy have developed a synthetic biomimetic material inspired by how plants photosynthesise, absorbing carbon at a much higher rate than trees. Unlike a tree they are able to function during the hours of darkness. 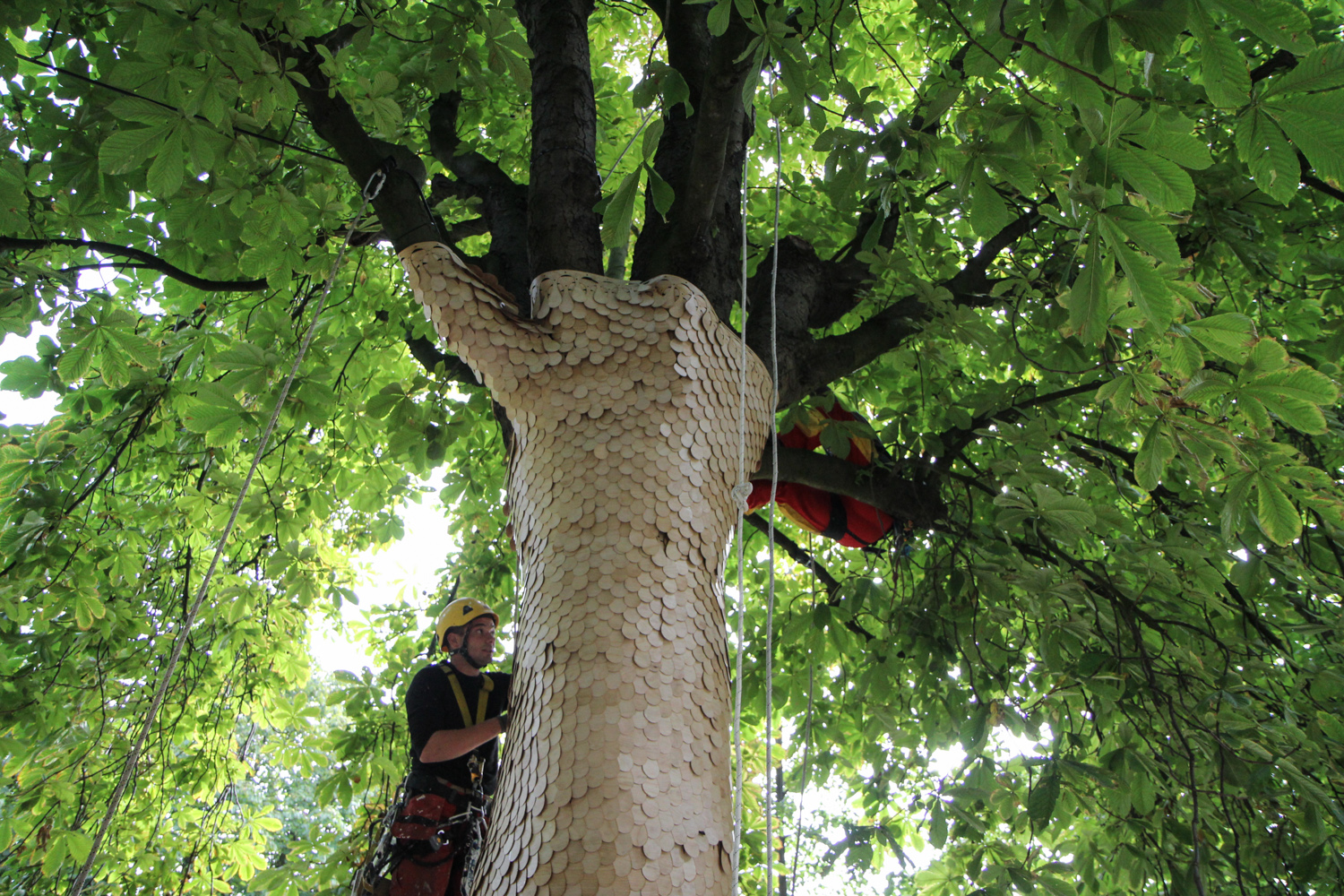 Nestled within the Energy Orchard are the breathing TreeLungs, a synthesis of natural and technological materials. A woven mass of electronics, cabling and wood intertwine and branch from a central point. They resemble the familiar structure of fractal trees and lungs because trees are considered the lungs of the earth.

Plants help the planet breathe by turning carbon dioxide into clean, pure oxygen, which is necessary for all life. This delicate balance of gases between life forms is part of the deep interconnectedness of life.

The TreeLungs breathe in and out with an animated flickering of light. The breathing rhythm deepens, slows and distorts in synchronicity with the fluctuating carbon levels within the park. Several carbon sensors distributed across the park and in close proximity to the main road provide the environmental data. Carbon levels were at the highest when traffic flow was at its greatest resulting in a quick and shallow breath. 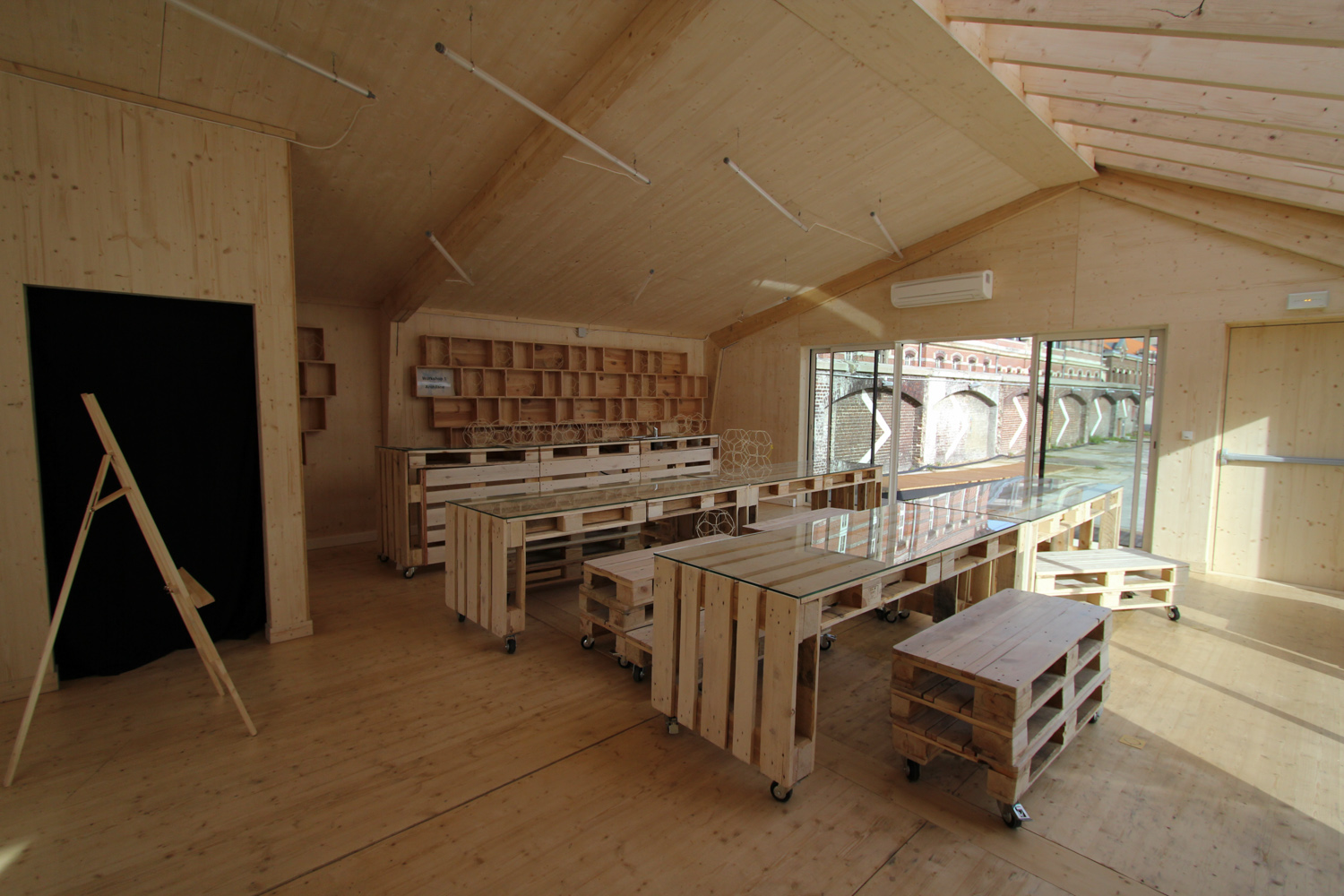 The Living Laboratory is a space designed to explore and experiment with new ideas for energy production. Our first architectural structure is a crossover between a low energy timber frame and a greenhouse. A number of exterior and interior installations plus a workshop series for the school children of Lille demonstrate living energy concepts first hand.

A 25m long Archilace structure grows out of the Laboratory recreating the branching logic of trees, while Algae Curtains photosynthesise in the large windows growing biofuel that does not compete with food stock. Local carpenters made all the lab furniture from re-used Euro pallets, so there was no waste from our London shipment.

The Living Laboratory was a place to plant seeds for Lille’s energy future and an opportunity to explore how the artist-led interventions could grow over time across the entire city. The series of four workshops ran over a three-month period and experimented with growing bio-fuels on the sides of buildings and pumping algae through a huge map of Lille. There was an introduction to artificial photosynthesis where people made solar cells from the dye of edible berries and introduction to bio-engineering with bio-luminescent lanterns. 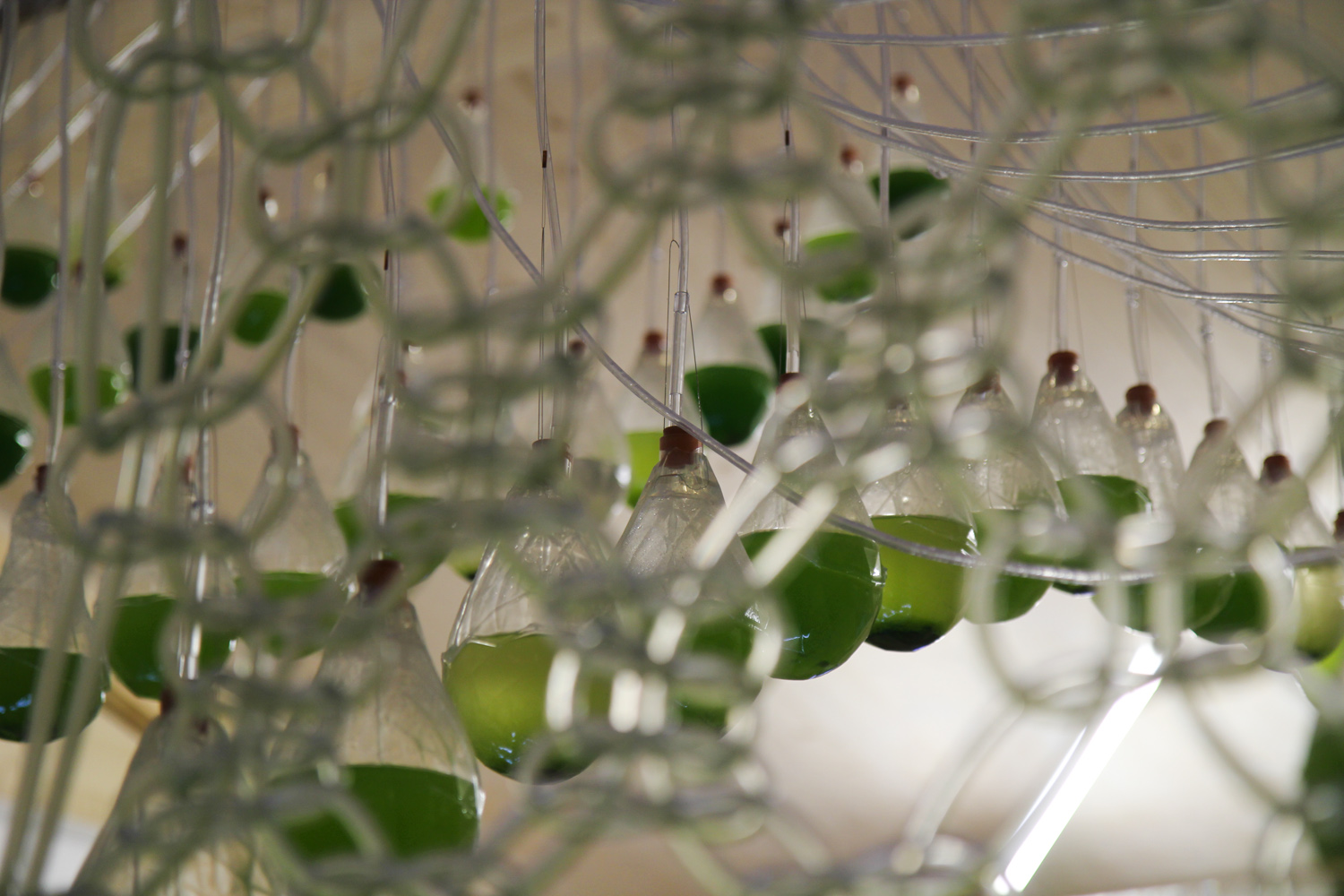 Transparent tubes are knotted into large architectural drapes suspended in sunny windows. Living algae is pumped through the textile soaking up the daytime sun and photosynthesising to produce a bio-fuel that can be used locally.

Microscopic algae grow ten times faster than trees and produce huge amounts of oil through photosynthesis. The Algae Curtain provides a permanent support infrastructure for the Future Fruits and together form micro-ecologies networked with a tangle of living plastic.

Future fruits are the harvest of the energy orchard and are plucked from the hybrid trees for their bioluminescent and energy producing organisms to provide light and fuel for the city. The capsules can be considered an evolution of the everyday battery but grown from living matter to be harvested from trees.

Over 50 percent of Algae’s bio mass is oil and this oil can be refined to produce renewable and sustainable bio-fuels. In nature algae can cause massive destruction to aqua based eco systems by starving the water of natural light, yet global energy concerns could be addressed by harnessing the photosynthesising algae in photo-bioreactor technologies.

Microscopic Algae’s yield per hectare is considerably higher than that of sunflower or rapeseed. Using algae as a biomass for generating oil, 75000 litres of bio-diesel per acre per year can be generated, compared to just 68 litres using corn as a biomass. 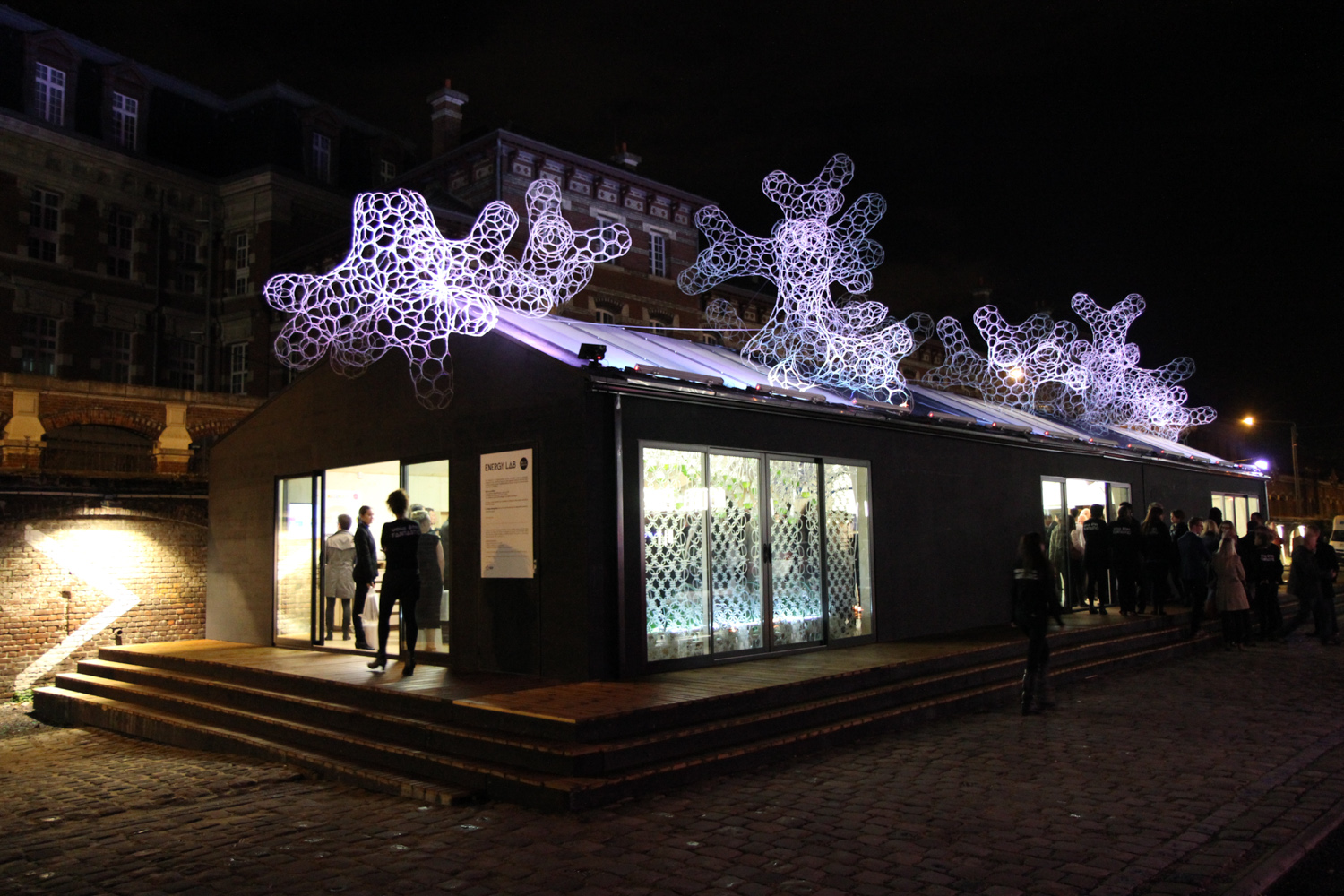 Archilace is a technique that allows designers, architects and citizens to intervene and re-construct the built environment, promoting the idea that architecture is a process and in a state of constant transformation. Weaving with composite rods allows for virtually any imaginable surface to be created from a small number of parts. Recently discovered structures that were previously unbuildable can be fabricated by hand using a textile, curvilinear approach – breaking the rectilinear geometry of our built environment with a non-Euclidean geometry made from curved structural elements tangentially joined.

The branching fractal structure was hand-woven on the roof and façade of the laboratory and provides a scaffold for the growth of vegetation and pumping algae.